Warning Signs Your Company is Paying Too Much in Overtime 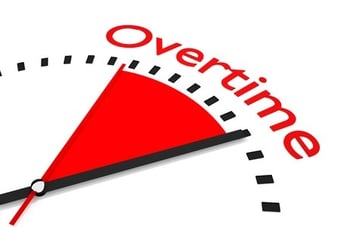 Overtime hours can be beneficial for both companies and employees. Overtime leads to more flexibility and increased ability to accommodate for higher demand without having to hire additional staff. While all of this may sound great, too much overtime comes with negative consequences. The average weekly overtime hours for Canadian employees in 2015 reached 11.8 hours for people working both unpaid and paid overtime and 8.4 hours for the employees working solely paid overtime.

Is it possible for employers to tell if they’re paying too much in overtime? When is the fine balance between operational hours and effectiveness disturbed? There are several signs to look for, if you want to determine whether your business is spending too much money on overtime pay.

Researchers have identified a positive correlation between long work hours and increased occurrence of health problems among employees. If you see an increase in sick leave or an increase in total lost workdays or injury rates, chances are that the normal workday isn’t being used effectively.

A Reduction in Productivity

Contrary to beliefs, more overtime isn’t correlated to a higher level of productivity. One study presented in the journal of the American Society of Civil Engineers showed that an increase in the number of work hours per week leads to a significant reduction in productivity in the construction sector.

If you’re spending money on overtime but the job doesn’t seem to be executed in a fast and efficient way, chances are that the overtime hours aren’t really being beneficial for your company. A workforce management software can help identify this problem.

Obviously, such a massive increase can have a profound impact on all businesses ranging from start-ups to large corporations. Such companies will be incapable of sticking to their preliminary budgets, which can put a lot of strain on the managerial team.

This is most common among companies that leave the overtime decision to the employees. In such instances, workers may see overtime as an opportunity to earn a bonus. Thus, all overtime hours should pass a strict approval process that involves the employer. Putting policies in place is one of the best approaches for dealing with such faulty practices.

Excessive overtime impacts all kinds of business operations and its effect goes beyond financial strain. When it gets chronic, overtime can diminish productivity, increase safety risks, lead to higher levels of absenteeism and even boost turnover rates. Strict monitoring and putting policies in place will both be required to address the issue effectively.

Managers know that overtime can eat into a company’s bottom line, but most businesses are so...

5 Warning Signs Your Employees are Overworked

Every once and a while, overtime can be a good thing for employees. Whether it's to save up for...